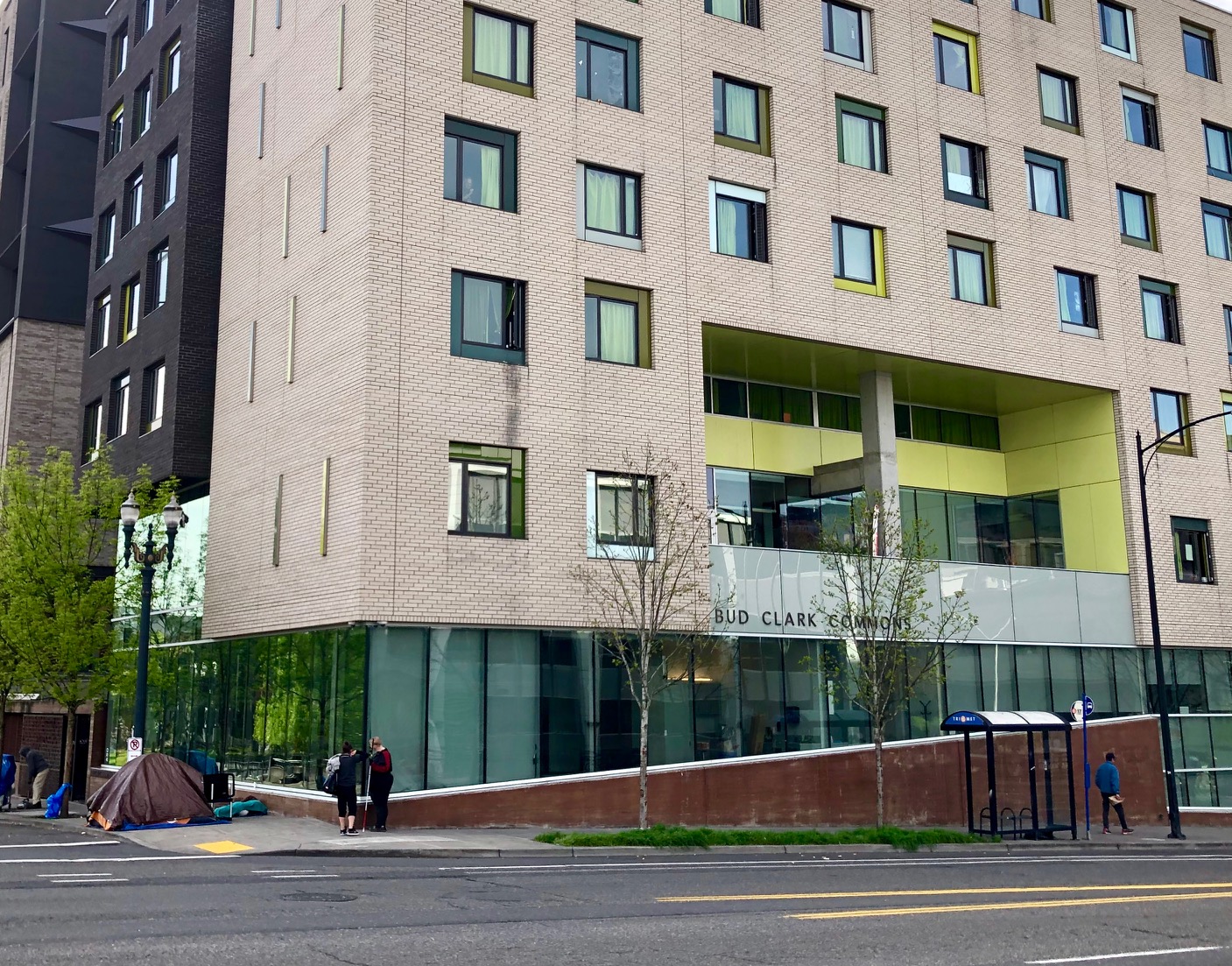 Bud Clark Commons housed 259 previously homeless people between January 1, 2015 and December 31, 2018.  Thirty-eight of them died there.  That’s nearly 15%.  Police dispatch records reveal 872 calls for service to its address: 15 for some of the deaths plus for numerous disturbances, some “with weapons,” thefts, assaults and many other reasons between January 2015 and July 2018.  Is Bud Clark Commons a feel-good model that taxpayers should replicate?  Or is it time to steal best practices used by other cities?

The Housing Authority of Portland, doing business as  “Home Forward,” manages Bud Clark Commons. It provides 130 apartments, including for people suffering from addiction.  “Low-barrier” housing or shelters means we expect little from guests, and they are free to continue suffering from addiction.  Housing first is the best approach for helping people because treatment is more likely to work if people have stable housing.  However, the type and location of housing is very important.  Bud Clark Commons is within walking distance of drug-selling predators in Portland’s last open drug market.  Residents may walk a couple of blocks, get their drugs, come home and die in their own apartments.  The public records did not indicate how many of the the 38 deaths were from overdoses or conditions exacerbated by drugs.

In the mid-20th century, housing authorities built projects in which they placed together low-income and welfare-dependent people.  We learned “the projects” are not the most fertile places for success.  The opposite is true.  Yet, here we are in 2019 continuing to provide mass shelters or housing where we group together service-dependent and drug-dependent people.  Successful cities find and create better housing options.

Chair Kafoury and homeless advocates use the annual “Domicile Unknown” report to argue we must build more shelters or projects.  Every citizen knows we have problems.  The report merely inflames the debate, distracting from the real question of whether the approach pursued by Chair Kafoury and Mayor Wheeler is the best one.

It cost us $253,000 per studio apartment to build Bud Clark Commons in 2011.  I do not know much it costs to operate.  Other jurisdictions found success reducing the numbers of unsheltered people by starting with audits:  Are we getting good results for the dollars spent?  Then, they re-direct money to more effective strategies.  Meanwhile, we in Oregon uncritically do more of the same, resulting in our dismal rankings among states plus the District of Columbia.  Oregon ranks 51 out of 51 for sheltering families with children, 49 of 51 for veterans, 47 of 51 for unaccompanied youth, and 50/51 homeless, cumulatively.

Our leaders need to do more than appear at ground-breaking photo / video-ops and brag about spending more money every time they expand a service-dependent ghetto or seed a new one.  They should audit existing programs, listen to neighbors and adopt best practices in a transparent process.