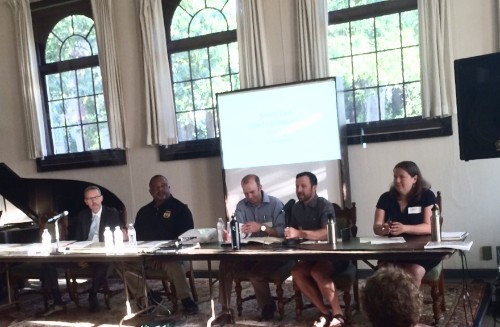 On July 31, I was pleased to participate in the meeting of citizens concerned about the proposed low-barrier homeless shelter across the street from a schoolhouse on SE Foster.  Although South East Allied Communities invited public officials, no public official attended or sent a representative.

Officials continue their approach of not wanting public input that might offer insights not raised behind closed doors by the usual suspects or at steering committee meetings of people hand-picked by officials.  Continued inbreeding only spawns more of the same policy that has caused Oregon to rank 49 of 51 (states plus District of Columbia) in sheltering homeless.

The failed old approach is based on a model where the homeless climb a series of rungs up a virtuous ladder back into society.  They get emergency shelter, blankets, meals, before addressing mental illness or substance abuse issues. Once sober and stable, find a home and job. Climbing to the top of that ladder is unrealistic for too many people, particularly when housed with active users surrounded by drug-selling predators.

Other jurisdictions have reduced homelessness:  Texas down 44% over 10 years; Salt Lake City down 86%, Medicine Hat, Canada, has eliminated chronic homelessness.  What do they do? Get people into apartments, not shelters.  Then, offer therapy and health care. They decentralize, and do not group the vulnerable into mass shelters, single building, or same neighborhood.

People have a lot to offer.  One panel member added up the costs disclosed so far for the Foster shelter, which equals $1,900 per month per bed.  That money could have been used to follow best practices of dispersed housing instead of continuing the failed approach of corralling people in shelters where the chances of success are minimal.

So long as government and private power brokers continue to freeze out new ideas, Oregon will continue failing the houseless and the housed.